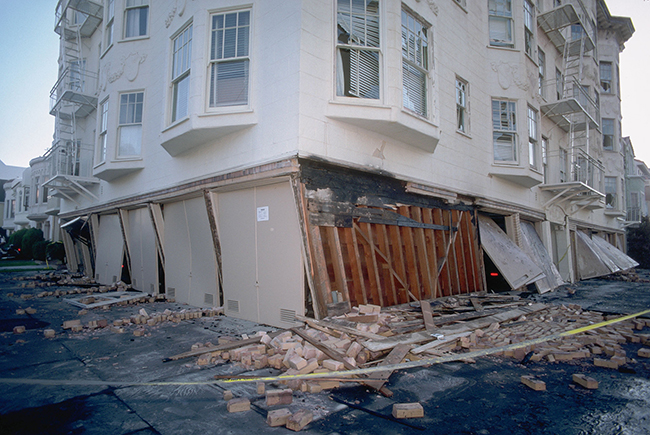 Sit down and get comfortable, because it’s time to hear a soft story. This story does not feature princesses, bean stalks or giants, and it won’t put you to sleep. In fact, this is a story that can give underwriters nightmares.

The soft story we're talking about is a construction type, generally found in buildings with parking garages or large open spaces beneath the main floors. A typical soft story structure is an apartment building with a parking garage or ground-floor retail showroom and two or more residential floors above.

Soft-storied buildings are particularly vulnerable to earthquakes. Large open spaces don’t have many walls to provide protection from a force called shear, which we’ll demonstrate in the following story. (See? I said I’d tell you a story.)

Understanding the impact of shear

Imagine placing your hand on top of a deck of cards. When you press straight down, the deck remains intact. The force of compression is keeping it strong and stable.

Now, imagine moving your hand from side to side. With this lateral pressure, you are creating shear. The cards slide around. Shear makes the deck unstable.

To prevent the deck of cards from coming apart under shear force, you could put them back in the box, or into a compartment with reinforcements on all sides. If any one side is open, the cards could slip out if subjected to the right kind of shear.

In a soft story building, the ground floor often lacks walls to adequately protect the structure from the side-to-side shaking that happens in an earthquake. The mass of the building sits on walls secured by posts, which are stable under the normal compression provided by the upper floors. But these posts aren’t enough to keep it stable if the earth shakes enough. 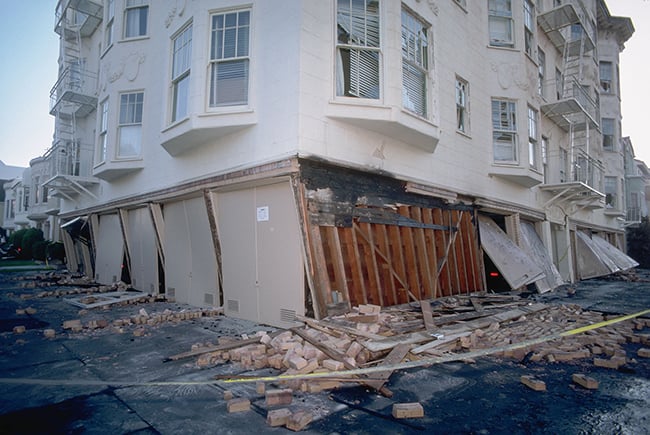 Related:
Do You Know Your Earthquake Classifications for Buildings?

What can be done about soft stories

Soft story walls usually require shear strengthening retrofits, which include adding sandwich plates, bolts and posts connected to each other from side to side. These retrofits stiffen the walls so they can remain stable when the ground shakes.

Some people think that if their structure is made of wood, it will incur less damage because it moves with the earthquake. However, in a soft story building, side-to-side movement is what you don’t want. Stability and stiffness are the keys to mitigating damage in these structures.

Retrofitting isn’t too difficult. A qualified contractor can do it quite easily, and it goes a long way toward stabilizing the building or home. It’s unknown whether the building pictured above had any retrofits, but it’s possible, considering the magnitude and intensity of the Loma Prieta quake, and the fact that this building was in the city’s Marina District, an area prone to soil liquefaction. Even so, it’s obvious that major damage occurred, pointing to the need for earthquake insurance.

Explaining the concept of soft stories should help customers who shy away from earthquake coverage better evaluate their risks, and understand why wood construction won’t necessarily protect them against shear force during an earthquake.