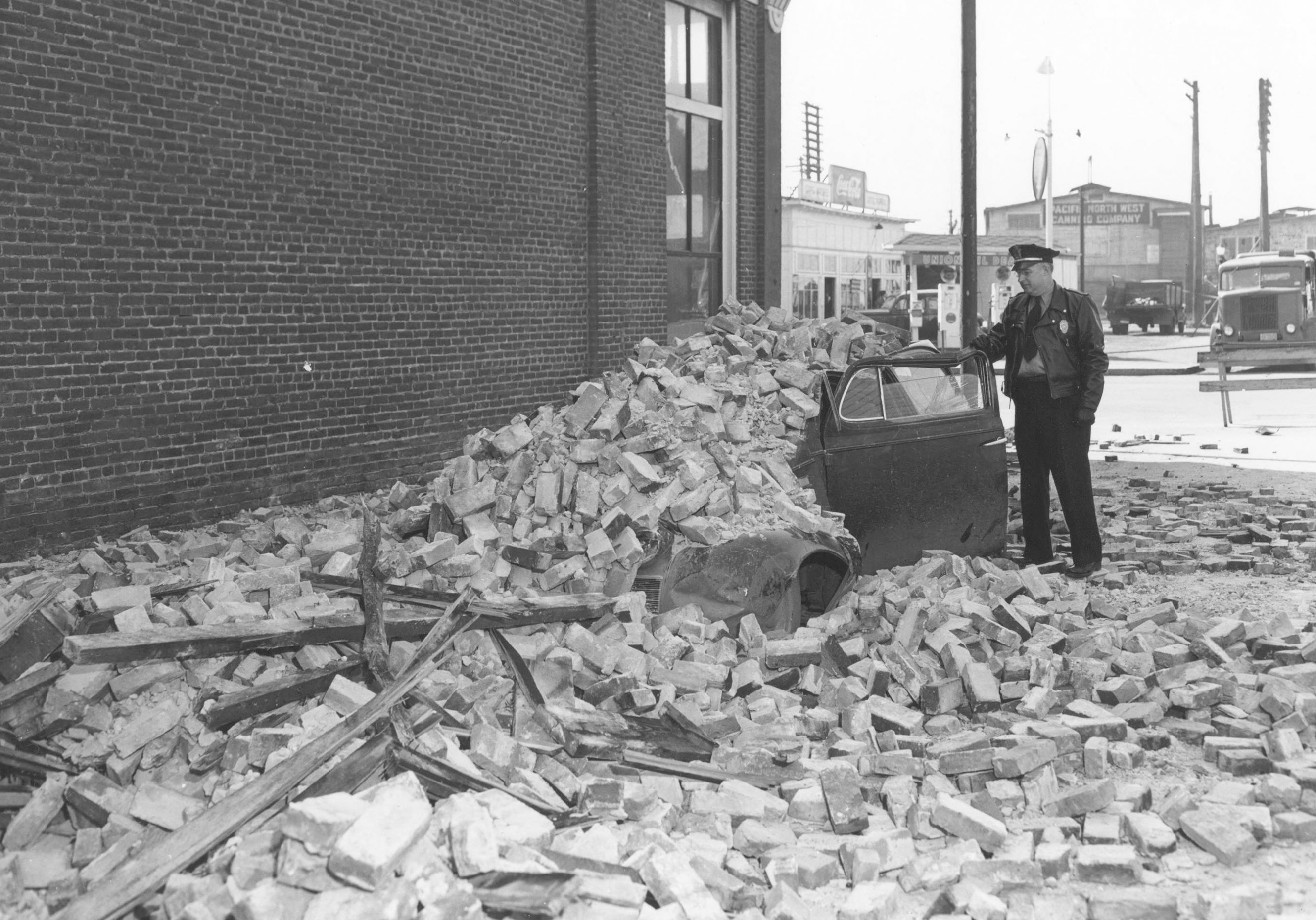 Did you know that over 1,000 buildings in Seattle are unreinforced, and only about 20% of those buildings have had the necessary seismic upgrades to make them earthquake safe?

Many buildings throughout the city and across the country, commonly completed before the 1940s, are constructed of unreinforced masonry. URM buildings are defined as structures built of masonry that lack bracing, making them extremely prone to collapse in the event of an earthquake.1

Let's explore the dangers these types of building pose and how to mitigate risk.

A bit of background

During the early to mid-19th century, wood was plentiful and cities all over America were booming, most notably on the West Coast.

By the time of the Klondike Gold Rush in the 1890s, Seattle had become a major stopping point for those heading to Alaska. Meanwhile, Californians were discovering gold up and down their state, leading to massive population growth. Cities needed a cheap, easy-to-acquire material to accommodate huge amounts of growth as quickly as possible and ever-abundant timber resources became the obvious choice for building.

While perfect for meeting the growing demand for housing, wooden construction turned cities into downright tinderboxes. By the end of the 19th and beginning of the 20th century, many metropolitan areas in America experienced huge fires that devastated their city centers. In 1889, Seattle had its own massive fire, joining Chicago and other cities — including Washington state cities Ellensburg and Spokane — in the effort to rebuild what was lost.

It was during this time that many builders switched to joisted masonry construction - after all, masonry, be it concrete, adobe, brick, stone or another material, is relatively non-combustible, especially in comparison to wood. 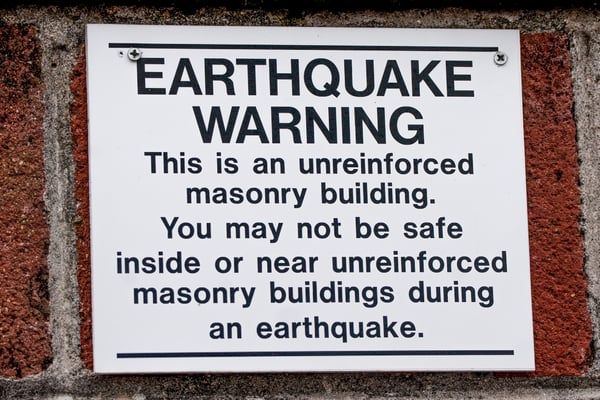 Though unreinforced masonry buildings are somewhat resistant to
fire, they are prone to severe earthquake damage.

Related:
Do You Know Your Earthquake Classifications for Buildings?

Masonry helps contain a fire within a structure for longer, whereas fire easily spreads between wooden buildings. While the contents and combustible flooring within masonry-constructed buildings might still be susceptible to fire, the external structures are designed to fall in on themselves when they collapse, halting the spread of fire to other buildings.

Unreinforced masonry is notoriously brittle and lacks tensile strength, a measure of how much stretching or pulling a material can withstand before it falls apart. In the event of an earthquake, the earth moves in all different kinds of waves, causing structures standing on top of it to move and bend. When you combine a rigid, brittle structure with a moving, fluid foundation, you have a recipe for building safety problems. 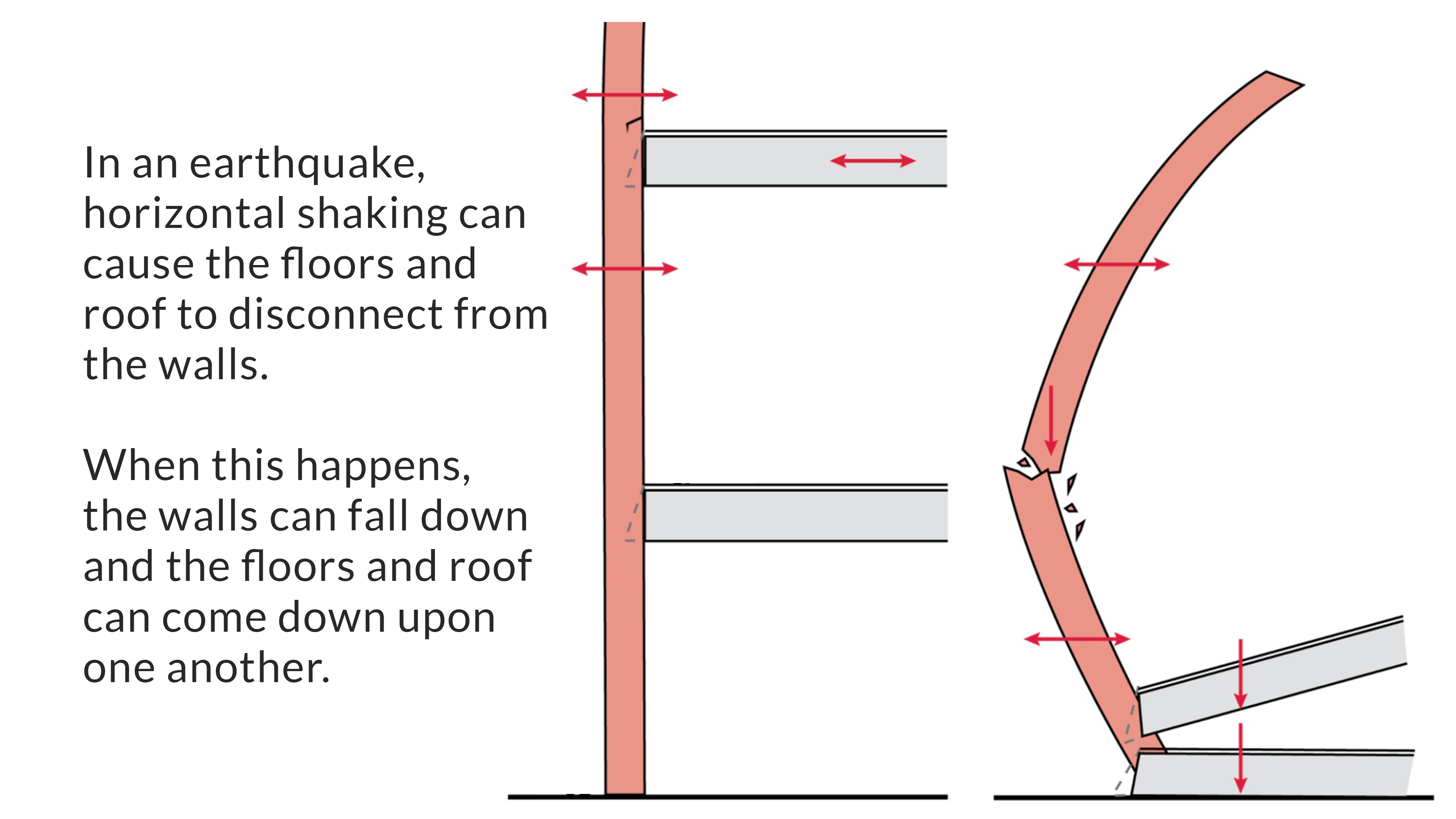 Looking at a long string of earthquakes from the 1906 San Francisco earthquake to the 1994 Northridge quake reveals examples of URM buildings suffering from complete collapse. The Nisqually Earthquake of 2001 was a magnitude 6.8 with an epicenter located near Anderson Island, about an hour and a half south of Seattle. Had the earthquake been located closer to the city, many more URM buildings would likely have collapsed. Here's an example of some damage done, and the repair efforts, in the wake of the 2001 earthquake.

What can we do? Going back to cities built from wood is not practical, and URM buildings are obviously unsafe. The solution is reinforcing buildings.

The case for reinforced masonry buildings

The entire West Coast of the United States, and some states across the South, require builders to use reinforcing structures.

Modern reinforced masonry buildings are proving to be safer and more reliable in earthquakes while also helping to prevent massive fires in most major U.S. cities. 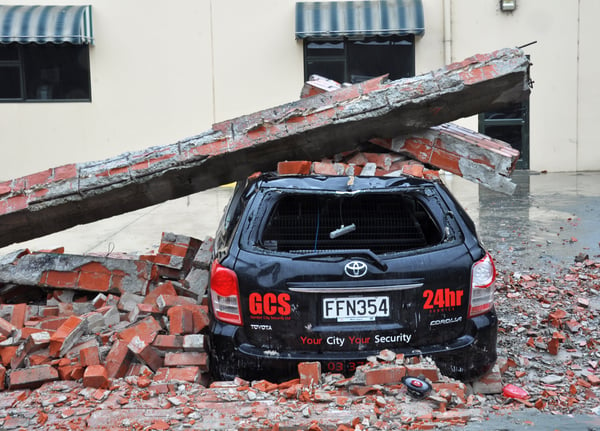 Fortunately, URM buildings are not just sitting ducks. Retrofitting, even 100 years after the building was constructed, is possible and effective. Many major U.S. cities are undergoing retrofitting programs or are working with building owners to address these issues.

The process is slow and requires careful consideration because retrofitting a building is often prohibitively expensive. After the Nisqually Earthquake in 2001, the City of Seattle passed a ballot measure to retrofit 32 of the city’s fire stations that were not properly reinforced. Over $197 million in tax dollars were collected to upgrade these structures. Some building owners in Seattle have said that it may cost as much as $1.5 million to update a single building.

Even in the face of massive costs (somewhere in the neighborhood of $1.3 billion), Seattle is currently developing its own program to retrofit additional buildings throughout the city, a project which you can learn more about here and here. However, there does not yet exist a law that requires structures to be strengthened.

With 75 buildings across the city at critical risk and another 184 considered to be at high risk, there has been a renewed push as of 2022 to create mandatory standards for retrofitting URM buildings.

Here is an interactive map of at-risk URM buildings in the Seattle area:

If URM buildings are not reinforced prior to a quake, much of them may need to be rebuilt after. However, of greater importance is creating a safe environment for people to live in. Retrofitting a building helps prevent damage or collapse, and keeping the structure sound means the people living or working inside have a much higher chance of surviving the shake. In Seattle alone, there are roughly 33,000 people in URM buildings on a daily basis as either tenants doing business or as residents.

What does this mean for your insurance?

Earthquake coverage is not included in a standard insurance policy in Washington state and must be bought separately. If you live in or own a business in a URM building and an earthquake completely or even partially collapses your business, home or apartment, your regular policy will not cover you or your belongings for the earthquake damage. That’s pretty scary.

Talk with your agent about purchasing earthquake insurance, and make sure you understand how it works. It’s always best to understand the coverage you’re buying and what it means before disaster strikes.

These stories on earthquake