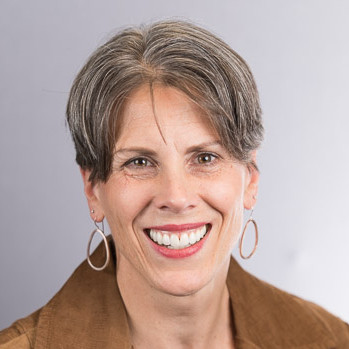 So far in 2019, WSRB has inspected more than 3,000 buildings, and we still have two weeks to go. It's safe to say we know buildings in Washington state.

To help you prepare for the new year, we've created a 2020 calendar full of some of the most interesting buildings from around the state. We haven't inspected them all, but we have found fun facts about each and included that information in the calendar.

But there was more to each building's story than we could fit into the calendar. Fortunately, here on the blog we have more space and can share additional fun facts about the featured structures and their locations. Some of the calendar photos came from WSRB team members, and we acknowledge them below.

The courthouse includes a clock tower and a bell, both made of solid brass. The building was finished in 1892 at a cost of about $150,000, and the bell still rings out on the hour every day.  Though the bell is entirely original, the clock was disassembled and restored in 1975. (The calendar photo was taken by WSRB CEO Karl J. Newman.)

The Spheres were built to give Amazon employees a place where they can work while connected to nature; the glass orbs house plants from more than 30 countries. Species include an Ecuadorian cacao plant, an Australian tree fern and carnivorous pitcher plants. Last year, a new restaurant serving Italian fare opened in the westernmost sphere. (The calendar photo was taken by WSRB Marketing and Design Specialist Kaylie Santos.) 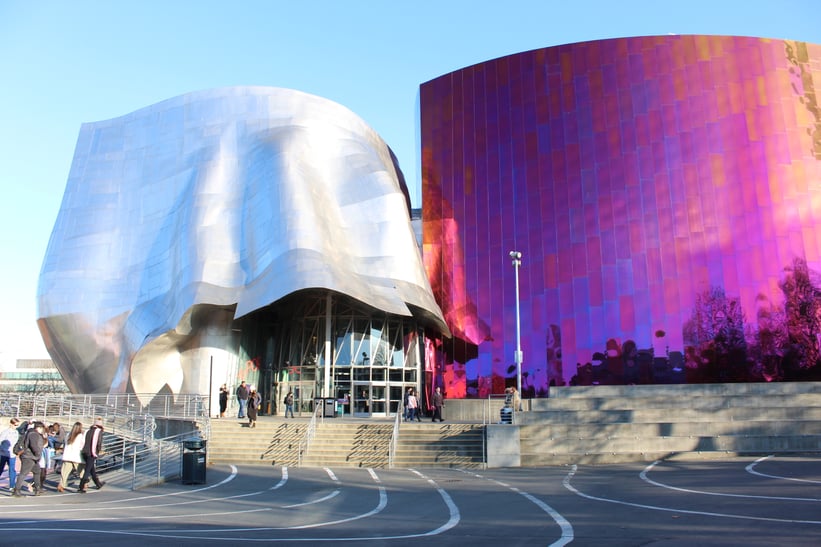 The Museum of Pop Culture, also known as MoPOP, is featured in the 2020 WSRB Calendar
for the month of August.

From the facade to the grand staircase, the building is full of ornate features. The library also houses unique items, including the Bhutan Book, one of the world's largest books. It weighs 133 pounds and measures 5 feet by 7 feet. A full-sized copy sells for $10,000; a smaller version costs about $75.

Opened in 1983, the venue's first event was a David Bowie Serious Moonlight Tour concert. Since then, the dome has hosted Goodwill Games events, multiple NCAA competitions and a long list of concerts from world-class musicians. In 2020, the dome will host events ranging from Monster Jam to Celine Dion to a guitar and drum festival.

Sixty-five: that's how many administrative buildings were scattered across the Tulalip Reservation that the new facility replaced. The new all-in-one building includes artwork from tribal artists, both as part of the structure itself and in open spaces. (The calendar photo and the photo below were taken by WSRB Senior Commercial Property Analyst Scott Molvik.)

The Tulalip Administration Building is the featured building for the month of May in the
2020 WSRB Calendar.

The Teapot Dome's name comes from a seemingly unlikely source: a rock formation in Wyoming that overlooks an oil field. The connection to the building in Zillah comes by way of a political scandal.

In 1922, federal Secretary of the Interior Albert Fall leased oil production rights for the Teapot Dome field without competitive bidding, which was legal at the time. However, Fall also accepted gifts from the leaseholder, which was illegal. Fall, convicted of accepting bribes, spent a year in prison. Jack Ainsworth handcrafted the building as a reminder of the scandal, which rocked the Warren G. Harding administration.

The lighthouse, which began operating in 1881, was Puget Sound's first manned light station. The light was originally a kerosene-powered lamp that wasn't switched to electric until 1926. Even then, lighthouse keepers kept kerosene lamps on hand in case the power or bulb went out. The lighthouse was automated in 1985, more than a century after it opened, and became part of Discovery Park in 2004. (The calendar photo was taken by WSRB Content Writer Elizabeth Whalen.)

The building has a host of unique features, including a sculpture made of more than 500 musical instruments (primarily guitars), one of the world's largest indoor LED screens and, most recently added, a statue of Chris Cornell. The tribute to the late musician, who was born in Seattle and rose to prominence with local band Soundgarden, stands outside the building on the southeast side. (The calendar photo and the photo above were taken by WSRB Content Writer Elizabeth Whalen.)

Part of the Episcopal Diocese of Spokane, the cathedral houses the official chair of the bishop in its sanctuary. This chair, a cathedra, makes the church a cathedral.

The materials used inside the building traveled long distances to become part of the cathedral. The stained glass windows were made in studios in Boston and Philadelphia; the baptismal font is made of marble from Tennessee and Italy, and the holy table, weighing in at four tons, is also made of Italian marble. (The calendar photo was taken by WSRB Senior Commercial Property Analyst Kaleb Landrus.)

The mansion is named for its original owners, Ezra and Eliza Meeker, who arrived in the Northwest in 1852 after a five-month trip on the Oregon Trail. Originally the Meeker family home, the building later served as a home for widows and orphans and a nursing home. Today, it's home to the Puyallup Historical Society. (The calendar photo was taken by WSRB CEO Karl J. Newman.)

Originally called Tacoma High School when it opened in 1906, the building was later renamed Stadium High School after the adjacent stadium bowl. The school and stadium were used as locations for the movie "10 Things I Hate About You," a modern take on the Shakespeare play "The Taming of the Shrew." (The calendar photo was taken by WSRB Commercial Property Analyst Craig Carlson.)

Visitors often come to Leavenworth for Oktoberfest or the Christmas Lighting Festival, but Leavenworth hosts festivals for nearly every interest. Events held throughout the year celebrate salmon, autumn leaves, birds, pears and even accordions. The town is also home to a nutcracker museum, wine and cider tasting rooms and a reindeer farm.

We hope you enjoy the 2020 calendar, and we wish you and yours a new year filled with joy. And, we look forward to serving you next year and beyond.

May 17, 2022 |
3 min read
Previous Story
← What Property Insurance Professionals Need to Know about Soil Liquefaction
Next Story
The Wildland-Urban Interface: Wildfire Risk at Your Doorstep →