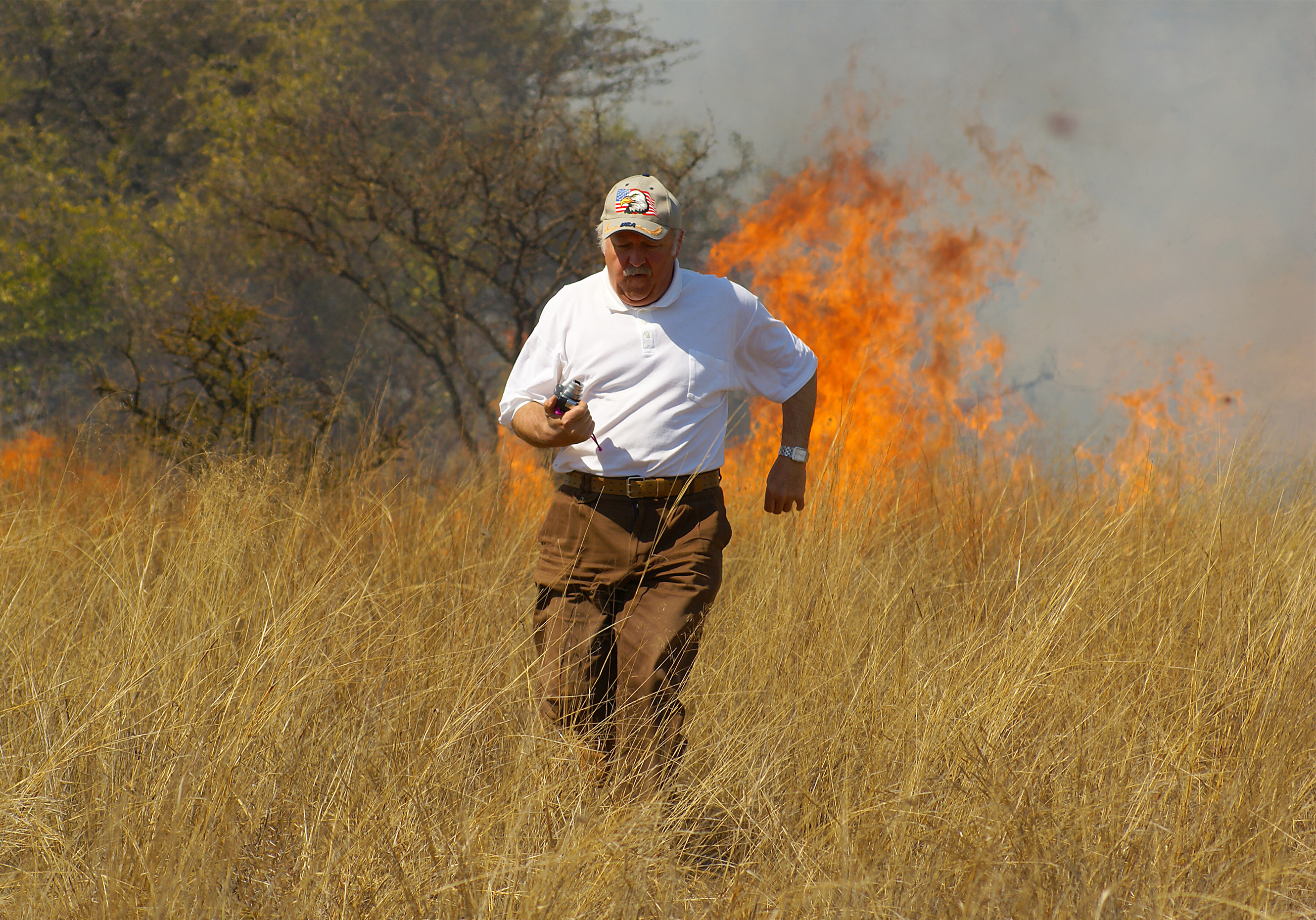 The destructive and deadly California Camp Fire is still fresh in my mind and haunts my dreams due to my first-hand experience with wildfires.

The Wildland-Urban Interface (WUI) or "where homes meet the forest" is where I live.

The beauty of the place, the isolation from the city noise and the perpetual movement of people and cars, the solitude — all of this made it easy for me to decide this is where I wanted to live.

I remember buying the property. Everything I hoped for was there: mountains, river, space, stars. There was just one exception. Most of the trees on the hillside, across from the river, were burned. The real estate ad failed to mention this drawback. At first, I was disappointed. I was expecting perfect views from all angles. 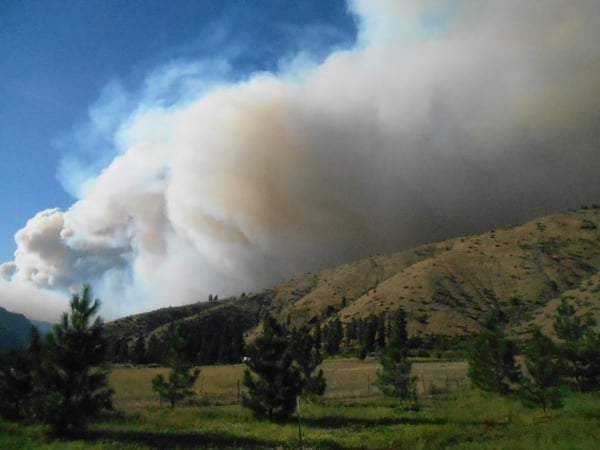 Related:
The Wildland-Urban Interface: Wildfire Risk at Your Doorstep

“The damage is the result of the 1994 Tyee Fire” the agent said. “The biggest in Central Washington (at the time), it burned more than 100,000 acres, It devastated the region.” She framed the situation as a good thing. “You don’t have to worry about another big wildfire in this area any time soon, there is not much fuel left to sustain it.”

She was right and, as I’ve continued to learn, living in this area is understanding the likelihood of a fire is big and real. They say, "it’s not if, but when."

And so it went, year after year, between July and September. Despite the fact we were lucky enough not to have a fire in our area, we were dealing with plenty of smoke from fires elsewhere in the region.

And then in the summer of 2018, 24 years later, the Cougar Creek fire happened.

It started the same week, from the same cause (dry lightning) and in about the same place, as the Tyee fire in 1994, right around the corner from my home. Over the last two decades, the area had rejuvenated and returned to its original splendor with new trees becoming established.

The fire started high in the mountains in a thickly forested area, and it grew fast. The conditions were ideal to stoke a forest fire. Shifting winds with gusts up to 40 miles per hour caused the fire to grow and spread rapidly despite firefighters’ efforts to contain it. Dry vegetation, high temperatures, and low humidity created a mix of optimal conditions for airborne embers to ignite spot fires as much as a mile ahead of the main fire. In a matter of just a few days, all of the homes on a stretch of about 10 miles of road in my neighborhood were upgraded from level one evacuation (be aware of fire) to level three (evacuate immediately).

There was no time to prepare for evacuation. We quickly set up sprinklers to soak whatever we could in an attempt to save our house from the fire. We left all the irrigation water lines going. We packed a few of our prized odds and ends and left our home and possessions, not knowing what would be left when we returned.

One of the first signs of danger was the heavy grey-reddish smoke in the hills behind our property. The air was heavy, and breathing became difficult.

The fire was growing rapidly; it was a monster devastating everything in its path. We were powerless and at the mercy of this force of nature. As the fire raged on, and with all the possessions we could grab, we jumped into our car and raced through the flames and devastation. The fire had crossed over the river, roaring down the hills, and began spreading up the ridge behind my house. Neighbors to the left and right had spot fires around their properties. Everyone was fleeing.

We saw firefighters in organized teams among the chaos. The crews were assigned to protect structures. The rough terrain didn’t allow the firefighters to attack the fire directly, but those with heavy equipment worked hard to establish a perimeter to contain the fire. About 800 dedicated people from across the country and as far away as Australia were risking their lives to battle the flames.

After a few days, my neighborhood was given permission to return home. Driving in, we were surrounded by fire on all sides. Our homes were located in a tiny sliver between the two fires, and I was full of dread about what I might find when I reached my property.

My house was still standing. The trees on my property were still intact. The sprinklers were on, soaking everything around the house, including the decks. The fire in the back of the house had not traveled too far down the ridge, and the firefighters had backburned everything up to the main fire.

The Cougar Creek fire consumed more than 40,000 acres, but amazingly no structures were destroyed. The smoke lingered heavily in the air for over a month while the fire was still active, haunting the ravaged landscape. 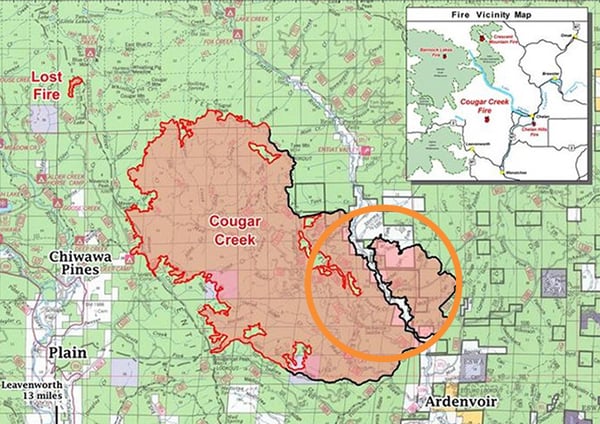 This map shows the area of the Cougar Creek fire

Related:
Some Parts of the West are Burning Again and Again

The cooling weather and fall rain extinguished the remaining pockets of fire, and when all was safe, I drove 20 miles up the road to survey the damage. The fire had scarred the landscape leaving an apocalyptic view.

I am in my home now, grateful to all of those who helped save it. And I can only hope there is not going to be another big fire in this area for the next 24 years (hopefully longer). As the realtor stated back when I bought the home, not much fuel was left to burn on those hills. But the grass and brush are going to come back fast. New trees will return. And again, the area will be susceptible to a wildfire.

My lesson learned: keeping a wide defensible space around your home is critical. This should always be a priority and a required part of everyone’s property maintenance program. As our region continues to grow and expand, and as more people move into homes built near or among lands prone to wildfire, we will all need to be increasingly aware of and educated about the potential of fire. We need to be prepared for the risk.

Cristina Pellett is a Senior Commercial Property Analyst with WSRB. She has a keen interest in green buildings and is certified as a Green Building Advisor. She holds a Bachelor of Science degree in Mathematics from the University of Bucharest in Romania.

These stories on fire safety

May 4, 2021 |
5 min read
Previous Story
← Soil Liquefaction for Insurance Underwriting
Next Story
Tornadoes in Washington: How Common Are They? →