Wildfires: What's the Most Common Cause?

Wildfires are garnering more attention, leaving many people wondering what causes them. Although the primary natural cause of wildfires is lightning, most wildfires are caused by human activity.

What percent of wildfires are caused by people?

There are a range of estimates available on the causes of wildfires. The results vary based on multiple factors, but two recent studies illustrate that human-caused wildfire is common, especially in certain parts of the U.S.

A 2017 study looked at a database of 1.6 million wildfires that occurred between 1992 and 2012 and found 84% were caused by people.1 That number represents the share of all the wildfires the researchers looked at, which occurred throughout the U.S. and were reported by a federal, state, or local firefighting organization.

Human-caused wildfires accounted for 44% of the total acres burned across the U.S., according to the study. In other words, naturally ignited wildfires accounted for only 16% of the total fires but for more than half the acres burned by those fires. The study authors said a key reason for this difference is that human-caused wildfires usually occurred in areas that are wetter and more populated and therefore closer to firefighters and firefighting resources. Lightning usually causes wildfires in drier, more remote areas. 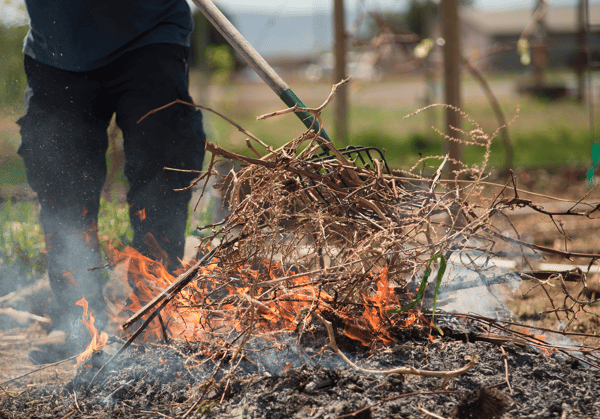 Debris burns are a common cause of wildfires.

Related:
How Homeowners Can Help Protect their Properties from Wildfire

The Washington State Department of Natural Resources (DNR) also tracks the causes of wildfires on the land it manages. Between 2010 and 2019 (the latest full-year data is available), the DNR found that 73.4% of wildfires were caused by humans, 16.6% by lightning, and 10% by an undetermined cause.2

The DNR’s report doesn’t state how many acres were burned by all human-caused wildfires and all naturally ignited fires, but it does provide some data on individual fires from 2019, their causes, and acres burned. The two largest 2019 fires in the report were caused by lightning and burned almost 51,000 acres. The 10 fires specifically determined to be caused by debris burns (that is, human activity) burned a total of 527 acres.

It’s important to note that, at the time of publication, the cause of several fires had not yet been determined.

How do humans cause wildfires?

In most cases, people do not cause wildfires on purpose, but embers (also called firebrands) from even a small fire can travel up to a mile.3 If embers land in a place full of dry vegetation, brush, or other easily-ignited material, a fire can quickly start and grow.4

Common sources of human-caused wildfires include:5

In 2019, 26 of the fires the DNR tracks were arson, and the DNR considers this a typical amount.6 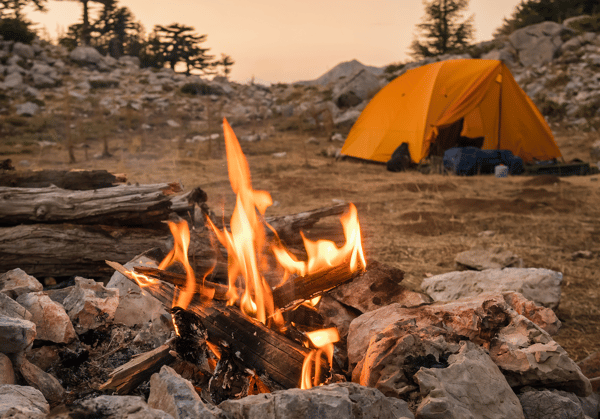 What are examples of human-caused wildfires?

Investigating the cause of a wildfire can be a long, complex, and involved process, and the causes of many of this year’s fires are still being determined.

Still, some major recent wildfires were caused by human activity.

The 2018 Eagle Creek Fire in Oregon burned 49,000 acres in the Columbia River Gorge after a 15-year-old boy threw fireworks into Eagle Creek Canyon.9 The teenager was sentenced to community service and probation and ordered to pay $36 million in restitution.10

What happens to people who cause wildfires?

That depends on the laws in place, which may vary. Here in Washington state, the DNR is required to investigate all wildfires that occur within the areas the agency oversees and to recover fire suppression costs from responsible parties.12 The DNR says that the “simplest way to avoid having to pay any wildfire suppression cost recoveries is to ‘burn smart’ when you have to burn and ensure your legal fire is completely extinguished prior to leaving it unattended.”

People have also been charged with arson when they’re suspected of intentionally starting a wildfire, including an Oregon man who has been charged with two counts of arson on suspicion he set a fire that contributed to the Almeda Fire.13 That fire burned 3,200 acres, destroyed much of Talent and Phoenix, and is blamed for three deaths.14 Another man in Oregon pleaded guilty to starting the Sweet Creek Fire that burned 382 acres near Mapleton. He was sentenced to 10 years in prison and three years of post-prison supervision, and he was ordered to pay restitution costs.15

These stories on fire safety

May 4, 2021 |
5 min read
Previous Story
← How Homeowners Can Help Protect their Properties from Wildfire
Next Story
Is There Meaning Behind the Color of a Fire Hydrant? →