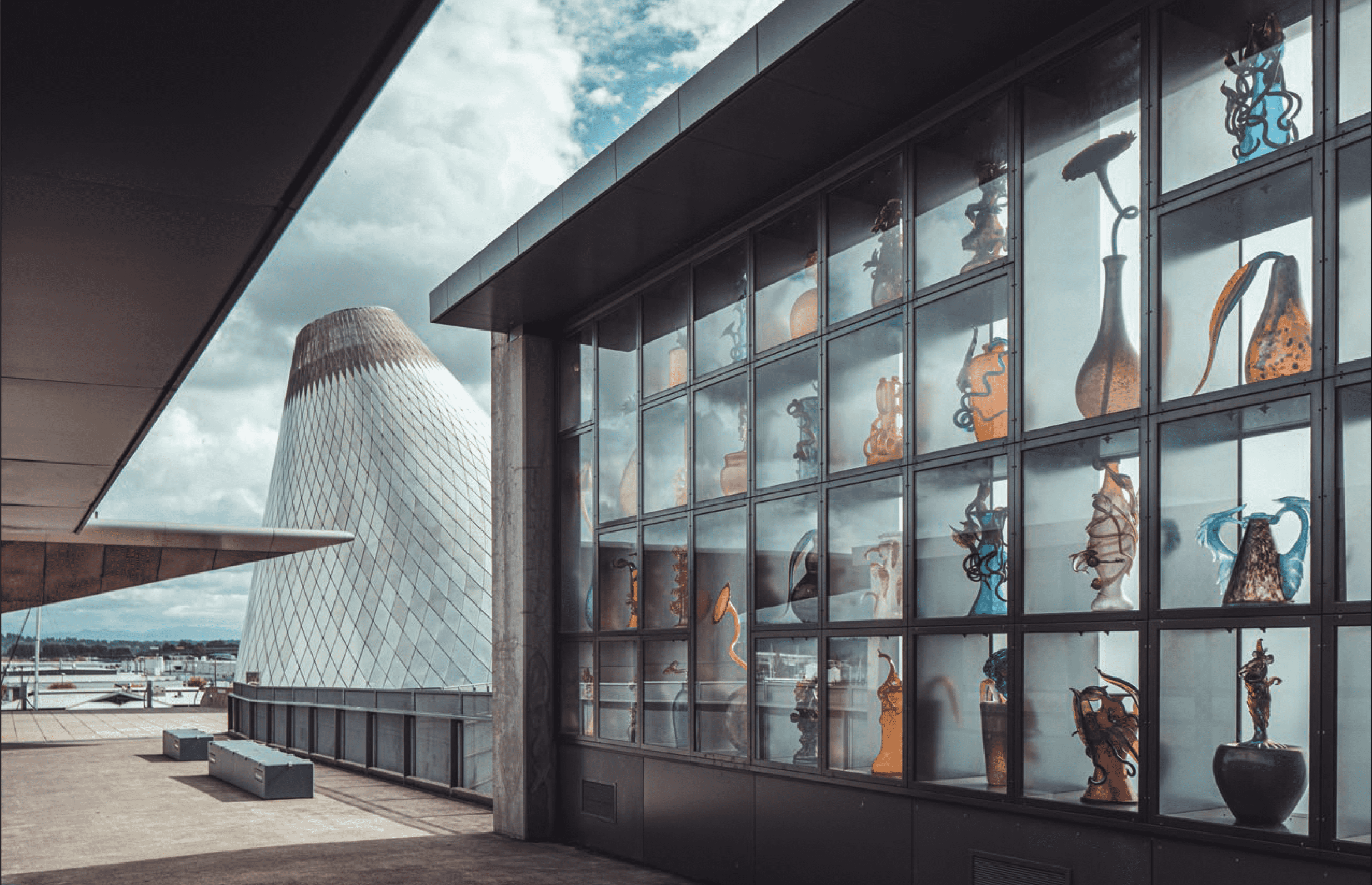 Another year come and gone. With 2022 right around the corner, what better way to ring in the new year than with a brand new calendar.

Featuring historic and noteworthy buildings from around Washington State, we hope this calendar can be your companion for another year and all it brings. Each month features something new, complete with pictures and fun facts about each location. Read on to learn more about some amazing spots to check out in this lovely state.

What a view! Boasting the highest public viewing area in the western United States, Columbia Center has remained the tallest building in Seattle since its construction in 1985. For many years the building was home to the loftiest Starbucks in the US, sitting comfortably on the 40th floor with sweeping views of downtown and Puget Sound (unfortunately this Starbucks has been closed).

With a design based on a theater located at the Palace of Versailles, the Pantages Theater in Tacoma is often cited as one of the most beautiful theaters in the country. While the block currently occupied by the theater was originally the site of Tacoma's first library and department store, the area quickly became a hub of vaudeville and entertainment following the Pantages construction in 1918.

March: Leonard Round Barn in Pullman

Raised by Thomas Andrew "Andy" Leonard and his family in 1917, the round barn has transcended its original purpose: today it's an oddity, an architectural touchstone, a historical monument. Considered by many to be the most photographed barn this side of the Mississippi River, a dedicated team of restoration experts and community supporters have ensured that this landmark will live on for years to come. 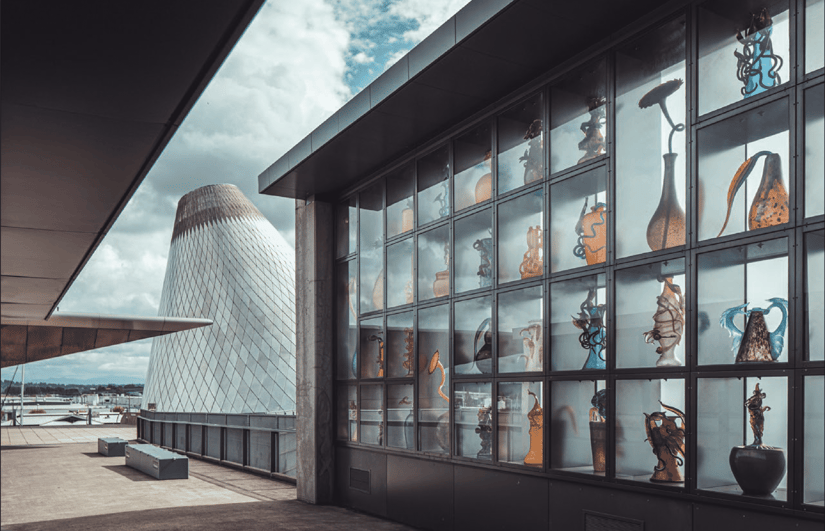 No trip to Tacoma is complete without a stop by the Museum of Glass.

April: Museum of Glass in Tacoma

It's no secret that the Pacific Northwest has played a major role in the studio glass movement - ever heard of Dale Chihuly? The Museum of Glass was developed in the late 90s as a lasting testament to glass blowing and its rich history in this region. Visitors to the museum get the opportunity to watch live demonstrations of the art form at the 145-seat hot shop amphitheater.

May: The Great Northern Clocktower in Spokane

During the late 19th and early 20th centuries, Spokane was a regional railroad hub. In 1901, a massive depot complex was constructed, considered by many to be the finest west of Chicago. When Spokane was selected to host the Worlds Fair, Expo '74, the station was slated for demolition. However, thanks to the fair planners and their foresight, the clock tower was retained and stands today as an important landmark for the city.

Restored to working condition in the 1980s, the Cedar Creek Grist Mill is a working museum that offers a window into the past by demonstrating to visitors the process of milling grain. Sitting on a rocky cliff beside the narrow Cedar Creek gorge, the mill is the only one in Washington that has maintained its original structure for over a century.

One of the oldest national park lodges in the country, Paradise Inn was built in 1916. During World War II, the inn hosted US Army troops who were using the national park as training for winter mountain conditions. In June 1945, a month after the German surrender, President Harry Truman visited the inn on a tour of the park.

Established in the first half of the 19th century, Fort Vancouver was a fur trading post and a regional headquarters for the British Hudson's Bay Company. Ships from England would bring supplies and goods to trade for furs with the various indigenous groups in the region. Furs were sent back to the UK or exported to China, the fort being an important link between the markets of Asia and Europe. 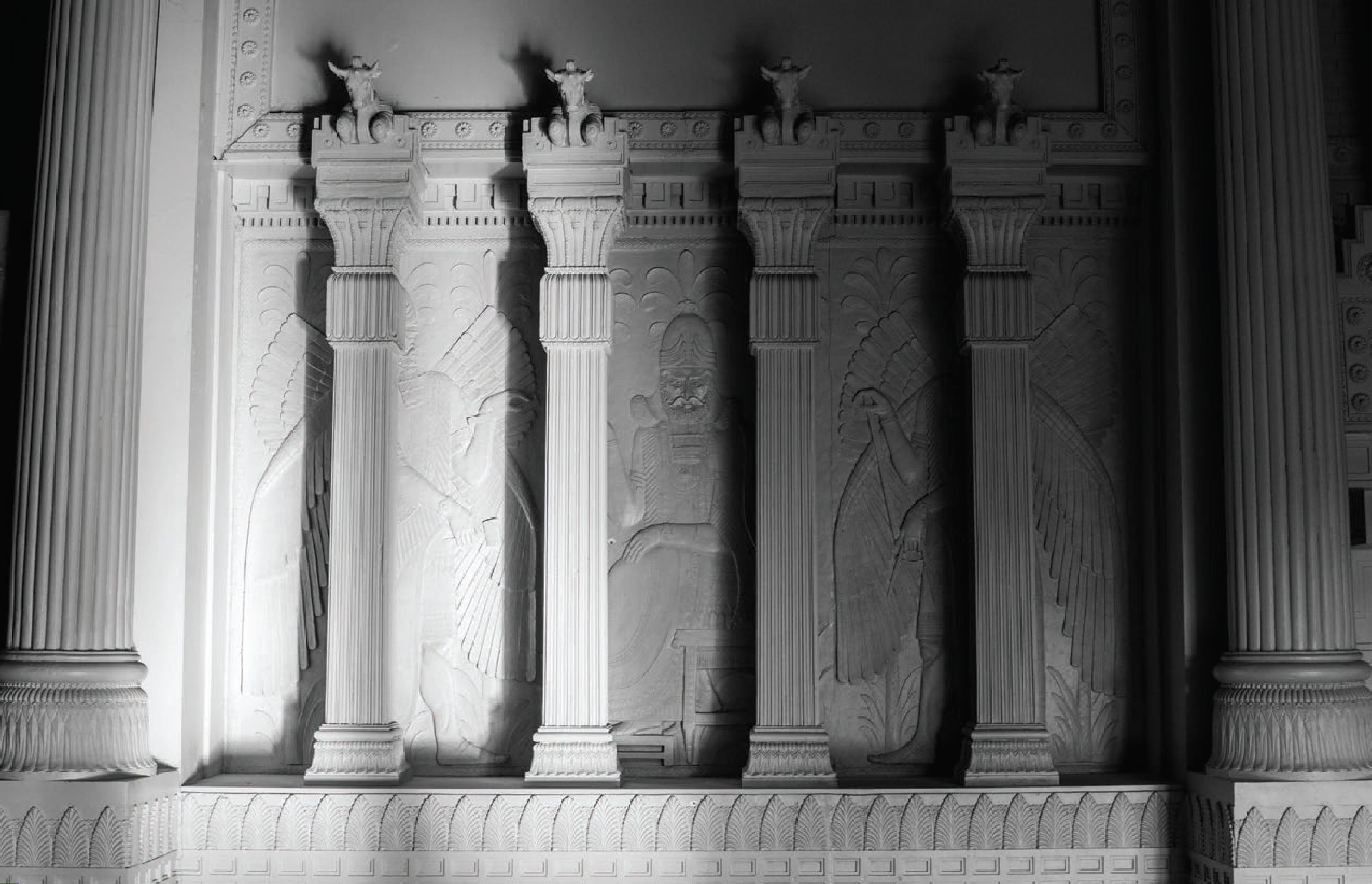 Upon completion, the Masonic Temple in Yakima stood as
the tallest building between Seattle and Spokane.

Taking inspiration from Biblical descriptions of Solomon's Temple, the Yakima Masons broke ground on their temple in September of 1910. To cap off the project, the group planned to lay the keystone of the front entrance arch during the Washington State Fair, an event set to happen only a year after construction began. Thanks to a U.S. consul in Jerusalem, a proper keystone was acquired and transported to the U.S., making it to Yakima in time for the opening ceremony.

Designed as a retirement home for Freemasons, this 1926 building has five levels, 200 rooms, a theater, a chapel, a massive commercial kitchen, and a grand formal dining room. Though no one currently inhabits the space, it's been rumored that a ghost named "George" still haunts the fifth floor.  Due to the overwhelming costs of restoration (roughly $40 million), the Washington State landmark has been slated for demolition.

From Chinese, Hing Hay Park roughly translates to "Park for Pleasurable Gatherings". Indeed, the park has become a community hub since its original construction in 1973, offering visitors the chance to meet with friends, challenge an opponent in a rousing game of ping pong, or gather for one of the many community events which take place throughout the year.

Best wishes and happy new year from everyone at WSRB. See you in 2022!

Sindi Robertson is the Director of Marketing & Communications at WSRB. She has over 20 years of experience developing successful marketing campaigns for a wide variety of organizations. She lives and works in Seattle, Washington.